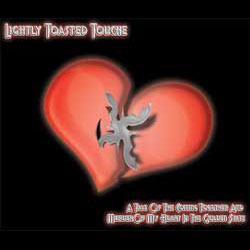 Lightly Toasted Touché was made up of myself, bassist and vocalist Mike Hooper, and drummer Adam Burwash. We formed in late 2003, and we were active until May of 2005. Our first and only EP, A Tale of the Coming Together and Murder of My Heart in the Golden State came out on February 14, 2005, and isn’t available anywhere, but I might be able to dig up the tracks to make this a pay-what-you-want release… maybe.

From: David Andrew Wiebe
To: You!

I know, it's a TOTAL drag. Stupid call to actions...

The thing is, I've got a TON of great content on there.

And I can't monetize ANY of it until I've got 1,000 subscribers.

Hey, I don't make the rules.