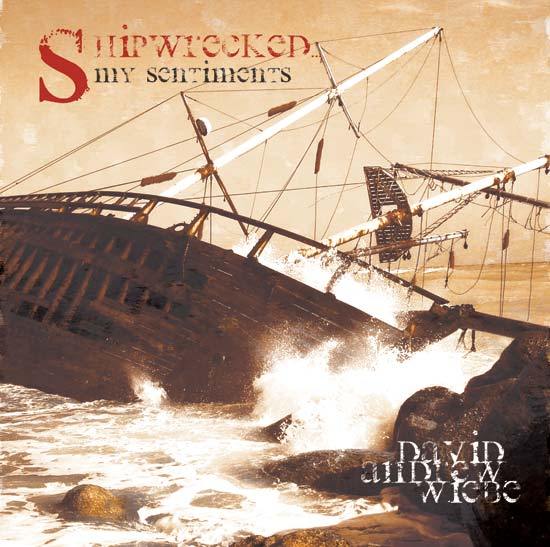 The year is 2005. My band just broke up, and I’m devastated. At least I can keep making music on my own. In the midst of that, my cousin Mitch takes his life. Ouch. I grasp at words. “Shipwrecked” – that one seemed to stick. I wrote a handful of songs that were meant for my first EP, but with my producer’s encouragement, I proceeded to write and record two more songs to make it a full album. The songs speak of challenges in relationships, the inability to live up to impossible ideals, the struggle for identity and independence, the human condition, and parting words for friends and fond memories.

Principal recording for Shipwrecked… began on September 5, 2005 and was completed on April 11, 2006. By June of 2006, the CD was packaged and ready to be sold. The release, however, was pushed back until later that fall. The release party was held at Karouzo’s Pizza Steak House & Lounge on September 8, 2006 in Calgary, AB.

An experimental approach to conventional rock. With great song-writing skills, great vocal tonality, and a tight sound on acoustic, electric, and bass guitar, David Andrew Wiebe delivers a killer sound. His guitar solos cut through tracks with an axe matched to the late and great Hendrix. The music stands alone with great production, effective group chemistry, and a really rocking sound. With sounds similar to Pearl Jam, Green Day, Incubus, and the Sea and Cake meets Eric Clapton with Elvis Costello tinged vocals, this album encompasses the struggles of modern man and the desire to break free from conventional boundaries.

Tr. 1 – “Six Sides” – This opening track kicks listeners into gear with fantastic momentum, a great violin melody, and killer guitar. Wiebe takes lead and sends to listeners the mystery of chance in life.

Tr. 6 – “Human” – A very moving track that gets you up and on your feet. With seamless transitions into a great chorus filled with great hooks, this song is bound for popularity.

Tr. 9 “Between the Lines” – A track full of witty perception that puts into perspective the inner contradictions that lay within the nature of man. Great musicianship and a social message delivered to boot.

Here’s a track-by-track analysis of the musical influences that helped shape this album:

Eric Clapton’s bluesy guitar style had a significant impact on the direction of this song. I wanted to put my own spin on a typical E5-G5-A5 type chord progression, so I turned the chords into dominant 7ths. Technical jargon aside, this makes up for the jazzy/bluesy sound you hear on the song.

Not By a Long Shot

The Mourning Widows had a lot to do with how the chorus took shape, and Further Seems Forever inspired the backing vocals for the chorus. Some of the jazzier parts of the song were likely (but unknowingly) inspired by the likes of Remy Shand, Ivana Santilli, Eric Johnson, and Wes Montgomery.

This song came about when I slapped a capo on the 3rd fret of my guitar, and started playing around with some chords. It was one of those rare moments of inspiration that turned into a full-fledged song. To some extent, worship music inspired the direction of this song.

One of my favorite bands, Extreme, helped inspire the funk-rock groove on this song. It wasn’t originally arranged the way you hear it on the album, but it’s one of those songs that keeps changing and evolving, even now. The Mourning Widows inspired the backing vocals.

Remy Shand and Further Seems Forever provided some lyrical inspiration for this song. It’s the darkest song on the album, addressing some of the tougher issues I was dealing with.

Extreme had a big influence on this song. I think The Police may have also had a part in this, but inspiration is a funny thing because it isn’t always taken deliberately. It’s a happy accident, because The Police is a wonderful band and I love their music.

Harem Scarem’s acoustic ballads provided much inspiration for this song. During summer 2005, at a Christian camp, there was a particular Harem Scarem song running through my head the whole time. Using it as fuel, I wrote a song about the events that took place during the few days I was at camp, and that’s what turned into “Cartwheels of Life.”

In retrospect, I think Collective Soul had a lot to do with the direction of this song. It was also one of the first songs written for the album along with Six Sides. To some extent, worship music may have influenced this song as well.

Extreme was a big influence on this song (particularly their III Sides to Every Story record). I felt that the chorus made an important personal statement.

Live for This Day

Extreme, Van Halen and Harem Scarem had a lot to do with the musical direction of this song. I think it’s about the only song on the list that was suited for the end of the album.

Pre-Chorus:
We only came this far
To come right back to the start

Not By a Long Shot

Pre-Chorus:
It seems like every time I’m
Trying to catch up to you
Why do I keep on falling?
When I need to see this through

Chorus:
This is the story of my life
Accusations from my pride
I’m nowhere in the ballpark
Not even close – not by a long shot

This is my plead, this is your greed
It’s the root of my indecision
How can I win? You always win
That’s how this story reads

Chorus:
I’m burning out
I’ve lost my cause
It’s not your fault
I guess I’m just too weak

I’m out of touch, you’re out of sense
I can’t depend on you for my faith
How can I win? You always win
You never even gave it a chance

Bridge:
Somebody told me that life isn’t fair
But I believe there is some fairness
This ultimatum is not enough
But nothing seems to satisfy you

Chorus:
Don’t put me down as a soul in search
Do you see me as your clay to mold?
Don’t run me down, you’re cynical
I know that I can’t make it on my own strength

How clear can clarity be
When everyone’s misunderstanding me?
But soon the moment will arrive
And I’m ready to take a dive

You took me out like yesterday’s trash
You pushed me down the elevator shaft
Letdowns are sweet, like the honey of your lies
You killed my hopes and dreams for life

What did I do to deserve this pain?
Why did I care about your vanity game?
Failure is sweet like the honey of your lies
This is all I ever wanted, why did I even try?

Chorus:
It’s right in front of your nose
You’ll run away afraid
Because it’s all you ever knew
It’s all you’ve ever got to lose

Chorus:
The heat, the sun, every day on the run
Cartwheels of life leaping steadily forward

Bridge:
The world is spinning, spinning around me
But it’s not so bad when you’re here with me

Chorus:
Whatever happens to you
Wherever you may go
Please don’t forget
That we care for you

I can’t align myself with endless contradiction
I can’t define myself with anybody’s system
My past informs my decisions every day
My stubborn ways will change, but maybe not today
No, not today

Chorus:
Oh, there’s something more than this between the lines
No, there’s nothing more to this – just another rhyme

Complacency is a form of greed we intend to purchase
We’re creatures of habit that lack devotion
My past affects my choices every day
This time of struggle will pass, but maybe not today
No, not today

Bridge:
Your fingerprints are evident, but inconspicuous
The beauty in what’s not seen will be seen

Live for This Day

Chorus:
I want to believe that this life is worth living for
I want to conceive a purpose that I never did before
I want to live for this day

I’m diseased; I can’t live my life this way
I’m in pain; I can’t stop this aching in my heart
No matter how hard I try I live in my memories
And I can’t escape this prison that I’ve created

Alternate Pre-Chorus:
There must be a reason and a meaning for this life
I can’t see it now, but I’ll never give it up